The latest released chapter most probably marks the end of the Zen’In family mini-arc the upcoming Jujutsu Kaisen Chapter 153 will most likely bring something new to us. The arc of the Culling Games and the entry of the only 3rd-year student of the Tokyo Jujutsu High school, Kinji Hakara is something which we all are looking forward to.

The Zeni’In Family arc of Jujutsu Kaisen finally seems to come to an end after the total eradication of the clan and its members leaving only Maki and Megumi.

With the latest released manga Chapter 152 of the JJK manga, the death of Naoya Zen’In became a reality and the future of the Zen’In clan has started to look pale as the question of its removal from the big three families has also started popping up.

The fate of the Jujutsu World has turned upside down after the Shibuya Incident and to make things worse Itadori is still nowhere near freeing Gojo Satoru from the prison realm.

Curses have started overflowing in Tokyo after the disturbance in the energy of the curse, jujutsu sorcerers are in a state of panic.

The manga has gone under an indefinite break after the poor health condition of its author. The fans of JJK have been eagerly waiting for the release of its upcoming chapter but now it seems that they have to wait a little longer.

The author of Jujutsu Kaisen, Akutami-Sensei in his latest released statement told the fans that he is not facing any serious illness but the break can be a little longer this time.

After the suggestion of the editorial department, the author has requested the fans to be patient and wait a little longer for the release of the next chapter.

The Upcoming Jujutsu Kaisen Chapter 153 will most likely release after at least 3-4 weeks. This news can be heart-breaking for the fans but considering the degrading health of the author we all can be patient and hope for his speedy recovery.

The Release date of the Raw Scan will most likely be going to extend but stay tuned and keep checking our page because we will release the date of the release of the Raw scans and spoilers as soon as possible.

As the release of the chapter has been put on an indefinite interval, the JJK 153 spoilers have been postponed and no spoiler has been released until now.

The manga is on a break so it may take some time before the release of the spoiler.

We request you to visit our website at little intervals as we will gather the spoiler as soon as possible and provide them for you to read. Stay tuned and don’t forget our Jujutsu Kaisen Season 2 announcement article.

The author had written in his letter that the upcoming Jujutsu Kaisen chapter 153 will mark the beginning of a new story and a new arc.

The Culling Games are still about to happen and before that starts, Itadori and his friends are trying their best to free Gojo Satoru from the prison realm as he can play a big factor in their strength. Itadori and Megumi are already on a mission to find Kinji, the suspended third-year student of their school.

There is also a chance that Noritoshi Kamo can attack Master Tengen Tomb to capture his original body so we can expect to see a face-off between Choso and Noritoshi.

The upcoming chapter can also focus on the preparation of Itadori and his group in freeing Gojo from the prison realm. They have already found a girl who has the power to reverse any curse technique and maybe they can go out to look for her and ask for her help.

The Fate of The Zen’In Clan:

The Gojo Clan and the Kamo Clan have started demanding the Removal of the Zen’In Clan from its position but it is most likely to get postponed as two major powerhouses are backing its position, namely Megumi and Maki.

Satoru Gojo is stilled sealed away and there is probably no other as powerful as him to back the demands of the Gojo Clan.

Maki at the end of the latest chapter killed her mother too who had been a part of the conspiracy in killing Mai. The dying mother at the end stabbed Naoya to end his prolonged suffering and at her end of she felt proud for bring the mother of Maki and Mai.

The Gojo, Zen’In, and Akmo Clan are namely the biggest and the most powerful family in the Jujutsu world. Major decisions and changes that take place in the Jujutsu World must pass through them.

The Gojo family has Satoru in this era, the holder of the Six Eyes Path and the Zen’In Clan now have Maki as the wielder of the reinforced body by the heavenly restrictions.

The secret and the most powerful weapon of the Kamo Clan is yet to unfold but as the family uses the blood manipulation technique, we can expect something great from them.

The Zen’In family has now been eradicated and both its Hei Unit and Kukuru Unit consisting of 6 and 21 members respectively have been destroyed and their future now has almost come to an end.

Gojo has also been sealed away in the prison realm and after the missing state of its strongest member, the fate of the Gojo Clan has also come under dispute.

Stay tuned while we bring more news about the upcoming Jujutsu Kaisen 153 release date and raw scans. Do check our article on One Punch Man Season 3 while you wait. 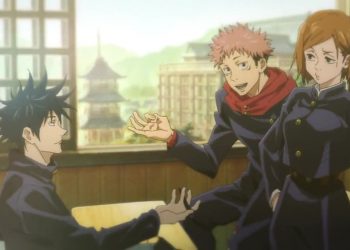