A death that has taken the fandom by storm. Even if All Might had died, we doubt the fandom would react up to this point. Oh yes, Bakugo’s death has been hard on us all and we are so keen to read My Hero Academia 363.

But is Bakugo really dead? We are praying that there is at least a tiny chance, that this guy would survive.

The donut club welcomes Bakugo! Ace, Rengoku, Kakoin, and so many other members welcome you! It is a privilege to be in this club. Now, the question is, will you stay a donut-like Obito, or quit the club like Ichigo?

Only time will tell us.

The newest promotional poster for the anime just came out. My Hero Academia Season 6 is releasing in October 2022. It will face tough competition from Chainsaw Man, the manga which gained immense popularity during its short run.

While My Hero Academia was the second best-selling series of July 2022, we aren’t very happy at this moment. The latest volume fell short of 600 thousand sales and that really does bum us out a bit.

Let us be honest. In the end, Bakugo is the most popular character in the show. Will he really be killed off? Or will we see him revived in a few chapters? As of now, fans are sincerely hoping that he can be saved in MHA Chapter 363.

One Piece Film Red is also going to air soon in various countries of the world, do give it a watch.

This week, all the titles in Weekly Shonen Jump are on break and the same goes for My Hero Academia manga.

It will be hard to wait but as of now, My Hero Academia chapter 363 raw scans are set to be released on August 17, 2022, in next week’s Jump issue. These are the raw scans that we just talked about.

Followed by the raws, there will be leaks and translation. On August 20, 2022, we will see that the chapter has been translated into English and released on the internet.

We suggest you just wait a little more. On August 21, 2022, the official English translations of My Hero Academia Chapter 363 will be out on Mangaplus and Viz websites, and the Shonen Jump app.

These are free sources plus legal. We recommend you to read there instead and support the creators.

One Piece Chapter 1057 and Black Clover 334 are also going to be published as the bnha upcoming English chapter.

Quirk: Explosion. Bakugo’s sweat has nitroglycerin, which allows him to make the explosions. However, Nitroglycerin is also a heart medicine.

Will this be the road to Bakugo’s revival? Or will he remain dead? We might see it in My Hero Academia 363 raw scans.

What did Tamaki do?

The attack launched by Tamaki was nothing short of incredible. Vast Hybrid: Plasma Cannon was extremely strong and we saw that it traveled for such a long distance.

No ordinary attack reaches that much power.

However, the villain is simply too strong. He claimed that Prime All Might would tank that move – however, All Might used to be the strongest hero. Tamaki is just unlucky since Shigaraki at this moment is too strong.

Boku no My Hero Academia Chapter 363 spoilers will show more combat between them.

What did Bakugo do?

Bakugo’s quirk reached the next level. His sweat leaked out from all over his body. At the cost of great pain, it also added incredible speed and power to his repertoire.

As a last-ditch effort, Bakugo went ahead and attacked Shigaraki.

As he predicted his opponent’s move and countered, he wondered if he can ever catch up to Deku. This incredible power surpassed the villain’s expectations and he was somehow reminded of the second user of All for One.

What happened to Bakugo?

In this chapter, we witness the death of the deuteragonist. That attack was nothing short of a miracle. However, once again, it failed to beat Shigaraki. The villain got serious and attacked, leading to Bakugo’s heart getting destroyed.

In his last moments, Bakugo saw a vision of All Might. He was the favorite hero of both Deku and Bakugo. And the kids had their All Might card. We see that Bakugo never got the chance to get the card signed. And now it has fallen beside his dead body.

Obviously, Deku seeing his friend dead will cause a great emotional surge. The weather has changed and his family is worried. This might be the end of Bakugo.

We will find out what will happen to him in My Hero Academia Chapter 363.

As of now, fans are just hoping that Horikoshi sensei is pulling a fake death scene like Hiro Mashima. These sort of scenes do stir up our emotions quite a bit and helps with the narrative as well.

The latest spoilers are out. My Hero Academia 363 will be a scary chapter. We see that the villains are not holding back. This is the beginning of their coordinated attack. A major shift is coming and the heroes are bound to be forced on the defensive.

As for Bakugo, it really does seem that he is dead. Will he stay this way? It hurts to even think about it. Nevertheless, we hope that the heroes are able to rise past the attack and avenge our fallen deuteragonist.

But of course, it won’t be easy. The villains are prepared this time.

Our team is constantly searching for spoilers on different forums, on Twitter, Reddit, and other places. As soon as we find more confirmed My Hero Academia 363 Spoilers, we will post them in this section for you. Kindly remain a bit patient. 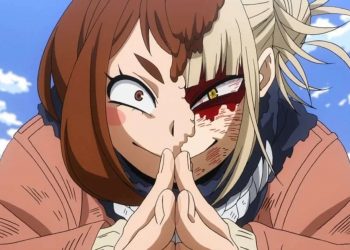