Are you tired of the regular head on clashes? The straight up battles? Well, fear not. We are beginning 2021 with a fight of wit, all thanks to Charlotte. Black Clover 278 is being awaited by the fans – they hope to see the amazing ability of Charlotte. It is time for Vanica to face some proper trouble.

Yuki Tabata’s Black Clover is one of the most prominent manga in Weekly Shonen Jump. It has a cult following and puts up decent sales. Since the anime is ending soon, people have already started to wonder when the next season will be released.

Problem is, when anime ends, the manga sales will obviously take a hit. And with the series already going down the ToC, we are unsure about its future.

The current arc has sprung into action, no time wasted. Last time we said that either we will see all of the fights between Yuno and Zenon, or we will jump to a different fight. Seems like Tabata will take the second approach.

Hence, Black Clover Manga 278 should show a heated clash between Vanica and Charlotte. The battle is heating up and somehow Black Clover is trending on Twitter this week, so this shows how much fans are liking it.

One Piece 1001 Spoilers and My Hero Academia 297 will also be releasing the same week so you should check them out as well.

Currently, Weekly Shonen Jump is taking the New Year break. Hence, we can have no chapter this week.

Black Clover 278 raw scans, or the Japanese version will be out on 13 January, 2021. It will be present in the latest issue of Weekly Shonen Jump.

As soon as the raws are out, people will start scanlating them – the translation, typesetting, redrawing will begin. We can expect the fan version to reach us within 16 January 2021.

On 17 January 2021, the official English translations of Black Clover chapter 278 will be released. To read it, visit Viz, Mangaplus websites, or the Shonen Jump app.

On additional note, there are news of High School DxD season 5 and Tower Of God Season 2 getting announced soon, so you should check them out as well.

Black Clover will release its Raws on Wednesday, in next week’s Jump Issue. We will try our best to provide those spoilers to you as soon as they’re available. Please keep an eye on our site and be patient until the 14th of January, 2021.

Edit: Only a few hours remain till the spoilers are out. Keep checking and follow us on our social media handles for all the latest updates.

Visit the ‘r/BlackCLover’ subreddit for a lot of theories and discussions related to Black Clover Manga 278.

We have barely started the arc and already there have been 3 new forms – Mereoleona, Yuno and now Charlotte. This is giving the fans a lot of hope – we will definitely see some amazing action in this arc.

Keep in mind, the team from Elysia is yet to arrive and they will surely show us new forms. Black Clover 278 and further will be filled with amazing magical techniques.

The fight is far from over. We have seen Dante – there are multiple layers to every Dark Triad member. Their powers increase significantly when they get serious. Black Clover 278 might dedicate a page or two, where we get to see Zenon.

As of now, Zenon is injured. He was surprised to see Yuno’s sudden power boost. That shock factor contributed to Yuno getting the upper hand. We believe that this won’t last for long. Zenon is supposed to be very strong and pretty soon, he will unleash more of his powers.

What is Charlotte’s ability?

Charlotte turned out far more capable than we could have imagined!!! Like the members from the Black Bulls, Charlotte too, has been studying advanced magic in the Heart Kingdom.

Charlotte is affected by a curse – when coupled with the Rune Array magic, she gains a new way to use her Briar Magic. Devil Megicula controls all curse magic – and using her own curse, Charlotte got strong.

Black Clover 278 raw scans will show Charlotte’s true power. The stronger her opponent’s curse is, the stronger her Modified Briar Magic becomes – she is currently an amazing opponent for Vanica, who excels in Curse Magic.

She can use her Curse eating Blue Rose and opponent smacking Red Rose – making her the Briar Queen!

Charlotte has piqued Vanica’s interest. Vanica is a person who is extremely battle-hungry – she just wants to fight her heart out. And seeing Charlotte’s new form has her all riled up. Charlotte easily defeated her 8 General lackeys, proving that she has the potential to give a hard time to Vanica.

Black Clover Chapter 278 spoilers should also show Vanica’s power. After all, she has the potential to use 2 types of Magic. From the looks of this chapter, it seems Vanica will be defeated even before she can begin. But we don’t think that will happen.

Vanica will probably recover in Black Clover 278 and there will be a big fight. And we are quite confident about this, because Noelle is supposed to be the final opponent of Vanica and Megicula.

The spoilers will be out soon and we will be sharing them here once released. So stay tuned on Recent Highlights for all the latest manga and anime news on the web. 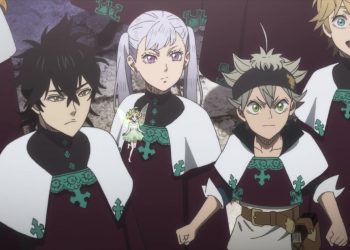