My Hero Academia Chapter 326 will show the first steps of society changing. It seems that our heroes are not to be blamed alone.

We are at the final few episodes of Season 5. Despite everything, the season managed to put up a good show for us. We thoroughly enjoyed this season of growth.

Comparatively, it was a quieter one but that is because My Hero Academia Season 6 will be utterly chaotic.

Do you think the old man is right? Should the current society be blamed as well? After all, their concerns right now are valid. The heroes did falter and it ended up causing widespread chaos.

People have the right to get defensive.

But according to the old man, the people could have acted and made this situation better. So how exactly should the people do that?

We believe the people should stop depending completely on the heroes and see them for who they are, people with jobs, people with feelings and problems.

The latest saga of the manga series is confirmed by the creator to be the final one.

This saga has been quite an emotional one. We believe bnha 326 will be another wholesome chapter whether more and more people finally show signs of changing.

The series is on a great roll. My Hero Academia 326 raw scans will be arriving on September 8, 2021. It will be retrieved from the newest release of Weekly Shonen Jump magazine.

The fan translations of the series will be coming out soon. It takes a little bit of time to do all the translating, typesetting, redrawing, and so on. We expect the English fan scans to be out by September 11, 2021.

The official Boku no Hero Academia 326 English Chapter has been delayed because of the author’s health issues and will be published on 19th September 2021, around the same time as Kingdom Chapter 691.

The legal sources for these are the Viz Media website, the Mangaplus website, and the Shonen Jump app. All of these 3 sources are absolutely free to read, for 3 weeks.

Black Clover Chapter 305 and One Piece Chapter 1025 will also be published the same day as the upcoming MHA 326 chapter.

What will happen if All for One suddenly attacks U.A in My Hero Academia 326? We believe people will start panicking and all this development they just went through, will go down the drain.

The worst case is that they revolt, capture Deku, and present him to the villain. Or maybe, none of that will happen and the people will stand together.

Only the upcoming Hero Academia 326 English chapter will tell.

Why did Iida stop Mineta?

Deku has been a good friend to Mineta as well. After a long time, the latter has gotten a chance to see the former. So he wants to go ahead and hug his friend.

But Iida stands in the way and says that it is not their moment.

Iida is right indeed. Uraraka, with her speech, swayed the public and now, it is time for the mob to act. Kota and the woman are already approaching Deku, Iida is sure that others will follow their lead.

And he is right, we believe My Hero Academia 326 spoilers will show a complete acceptance of Deku.

What is the old man saying?

The weird-looking old man puts up some hard truths. He points out how harshly the people are reacting and reiterates that Deku is staying here temporarily. The young boy just needs some rest before he can act again. He continues on.

The public has become spectators. Heroes keep fighting the villains and it seems like a performance to him. Something the people watch from afar and cheer for the heroes.

But in doing so, they forgot who the heroes really are, what makes them.

All Might is the prime example. With him gone, and the heroes facing failures, the stage is gone along with the performance. People are forced to accept reality.

They see that only a couple, brave-hearted heroes are left and they must not reject these heroes.

Boku no My Hero Academia Chapter 326 raw scans will probably show the people changing. The guy who was previously protesting seems to have accepted Deku. He is asking if they can ever get back to their old lives; it is something that everyone wishes for!

How is One for All linking people?

One for All is a power of harmony. Not only it accepts and adapts to grow, it also links people. It linked All Might to Deku, Deku to Class A, and now, Uravity tying Deku with all these people. It has also linked Deku to the vestiges and the morals of the past.

Hawks rightfully hopes for a better future. It is a future where the heroes have time to kill, which means there are fewer villains and there is proper harmony. My Hero Academia 326 will show if this quirk can link more and more people.

And then Aizawa sensei says the perfect thing. It is definitely time for payback. The villains have shredded society.

They must be eliminated. It is time to strike back!

Boku no My Hero Academia 326 Spoilers:

We understand everyone’s urge to read spoilers and honestly, we look forward to them ourselves as well. The My Hero Academia Chapter 326 spoilers are finally here for everyone to read.

These are only the early spoilers and more will be released soon. We will keep a sharp eye out and as soon as they are out, we will update this section with the spoilers for you to enjoy. Please be patient and wait with us.

While you wait for the upcoming boku no hero 326 chapter to release, feel free to read our articles on Solo Leveling Anime and The Beginning After The End Chapter 120. 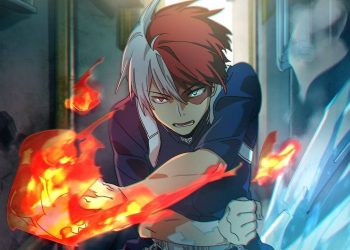 My Hero Academia Chapter 326 Spoilers Show All Might Meet Stain