The fights are getting harder but Qin is not one to give up. Against monumental odds, they face Zhao in an epic battle. In Kingdom Chapter 719, we will be able to see if Kanki has a proper plan to withstand the might of the Zhao left wing.

How long do you think the manga will go? If we consider history, there is still a lot to go. We should be around the halfway mark maybe. As of now, Qin still hasn’t annexed a single country.

Despite the incredible steps, King Ei Sei still has a myriad of expeditions to allow.

Shin and Mouten will show their combined might in Kingdom 719. Against the Seika generals, they will do their best to make a proper breakthrough. Will this light the fire that Shin intended?

Will it make an actual difference in this war? We will find out when the chapter drops.

There is a break this week. And due to this break, there will be no chapter of the kingdom that is coming next week.

But worry not, this is just a magazine break in lieu of the Golden Week celebrations going on in Japan. Once they are over, things will be back to normal.

Kingdom Chapter 719 raw scans will be released around the 9th of May, 2022, or before. We are all looking forward to the chapter. And of course, the raws will arrive first in the upcoming issue of Weekly Young Jump. And our scanlators usually work with the Korean raws.

The current scanlators for the series faced some issues and fell 2 chapters behind the series. But you will be happy to know that they have caught up a lot. Right now, up to chapter 717 has been covered by them. And with the upcoming break, they will probably catch up to the present.

We expect the English fan scans of Kingdom Chapter 719 within 13th May 2022. If this really does happen, the scanlators will be caught up with the release after a long time.

My Hero Academia Chapter 352 and Black Clover 332 will also be published this week for fans to read.

Spoilers for Kingdom 719 will arrive after the release of the Japanese or Korean raws. And as soon as they arrive, we will put them in this section. We expect them to arrive around the 11th of May, 2022.

We request you to wait patiently as we get the confirmed spoilers to you. You can spend your next visits here by reading the variety of other articles we keep posting regularly.

Remember to put your thoughts in the comments. Have fun!

Kanki still doesn’t seem worried. He has a plan for everything, does he? Marron is already freaking out but Kanki is waiting for something.

Maybe Kingdom Manga 719 will reveal if Kanki has some sort of master plan that will help his army make a major upset.

What is going on on the right side?

Ever since Shin ditched the right wing, the left Zhao is heavily assaulting the right side of the Kanki army. Marron is scared by the innumerable waves of the Zhao troops.

However, Kanki is not flustered. He has faith in the general of the north. And he asks them to live up to his expectations.

With great morale, the Northern General started to protect Kanki. However, due to the equality in morale, what came to matter were the troop numbers. And since Zhao outnumbers the Qin forces, the Kanki army is still in a lot of trouble. Kingdom 719 will show if there is something more than Kanki can do.

What is up with the left side?

The Mouten army is glad about the Hi Shin Unit. With the additional help, their job has become easier. Kyoukai helps them with her troops. And Shin asks his units to assist as well.

Shin knows very well that Kanki can handle himself. And thus, he and Mouten must make a breakthrough. Otherwise this war can’t be won.

The pairs of Aisen and Kyoukai, Naki and Rikusen work well. The synergy between Hi Shin Unit and Gakuka is felt by all.

Since their two generals have known each other since their 300-man leader days, the relationship is very positive. We expect to see some major progress in Kingdom Manga 719.

What will happen now?

So in Kingdom Chapter 719, we will see these incredible forces collide. Who will come out on top? Can Shin and Mouten breakthrough with their numbers disadvantage? We will see.

These are spoilers because we are talking about the historical events here. We already know things that are coming. Please read the section ahead if you have no problem with huge spoilers.

Qin will lose this battle. This will be a huge loss for the state and Zhao will be completely victorious. What’s more important is that Riboku will completely crush Kanki in this war. Kanki has always been cocky but this one war will destroy him completely.

So up ahead, there will be a lot of battle, but it will all lead to a major loss. Qin will have to recuperate from it and restart their Zhao invasion in the future!

Stay tuned while we bring the latest Kingdom Chapter 719 raw and English chapter spoilers to you. Also, read our article on Tokyo Revengers Chapter 252 while you wait.

An Engineering student with a love for anime, manga and football. Love to read and write and always aiming for an equilibrium. 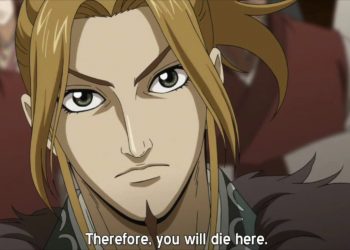 Hinamatsuri Season 2: What Is The Release Date?