by Zyan
in Manga, One Piece
0 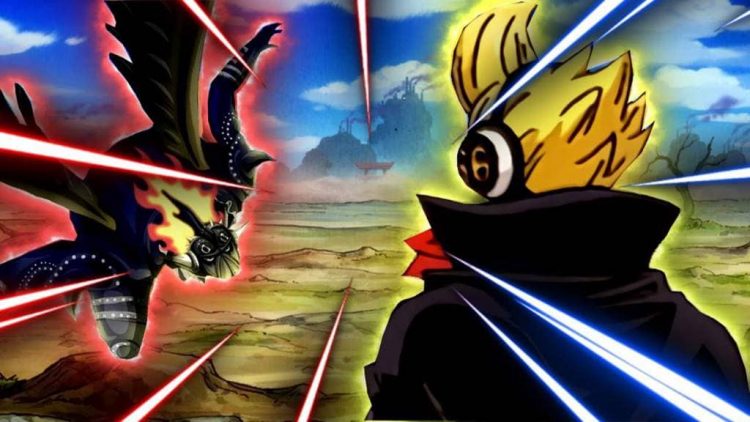 Today we will be discussing where you can read One Piece Chapter 989 which by the way, has been delayed and its spoilers. Fans are really excited now that powerful clashes are erupting all over the place. No time for an all-out fight – the warriors are clashing and moving on.

Sanji and Zoro fans are in a tough fight right now. Sanji fans are willing to bet that the blonde raider can give a great fight to King and with a little help, can defeat him. Zoro fans are searching for a proper Swordsman opponent and they are sure that Sanji can’t handle King.

One Piece 989 will show us more of the Sulongs – its revenge time for them. Jack was incredibly cruel to them and wrecked their homeland. Now they have a chance to get back at the Calamity. And maybe we will finally see the power of the Numbers.

The area around Big Mom must be cleared out. She just took a bike to the face. When the Yonko rises, she will absolutely squash any bug in front of her. We saw from her attack, her power is immense. Luffy must stop her here otherwise her wrath will harm all the straw hats.

All kinds of new things are going to be happening in the upcoming chapter and today we are here to share Manga Chapter 989 spoilers, raw scans, and the official release date.

[Update]- The raw scans have been leaked, the translation process will start soon and the spoilers will be shared here once they are out.

Addiition to one number we already saw in Chapter 988, three more numbers will be introduced in the upcoming chapter. As we all predicted, the numbers are not that strong and are results of failed giant making experimentation on the punk hazard.

According to Big Mom, those three numbers are failed versions of “Ancient Giants”.

Luffy tries to make his way up the dome to fight Kaido but gets stopped midway by King and Queen.

Franky and Robin fight together against beast pirates maybe.

Also, there is no break next week. That means One Piece 990 will be released on 11th September 2020.

Maybe due to health issues, Oda is taking another break. With One Piece 989 being delayed, it is basically a bi-weekly manga right now. According to Viz, the official release date for the upcoming chapter is 6th September 2020 that meaning no chapter will be released this week.

There are many websites that publish the unofficial chapter release but we support the official creators i.e Oda and that is why we ask you to read Chapter 989 from Viz and Mangaplus website only.

If you are someone who is fond of reading manga chapter on your mobile phone then you should download the Shonen jump app on your smartphone and start reading.

Solo Leveling 116 and Black Clover 262 will also be releasing soon so if you are someone who follow them, then you should check them out.

Before we move on to the spoilers and raw scans part, let’s take a look at what happened in the last chapter first.

Kaido sees the Mink Troops before him and realizes their plan of using Sulong against him. Right then, Jack and his henchmen enter the roof. Nekomamushi, Inuarashi and Raizo want to fight him due to the situation at Zou. Jack finally sees who Raizo is.

However, The Guardians and Musketeers step in. Rody and BlackBack under Neko and Shishilian, Giovanni and Concelot turn into Sulong forms. They want their dukes to focus on Kaido instead, while they handle Jack. The other minks transform as well. The Beast Pirates are ready too and Number 7 – Nagi is with them.

Inside the dome, Big Mom realizes they’re fighting already. King and Queen are arguing over Jack rushing in. King notices Shinobu trying to rescue Momo and throws her away. Suddenly Momo is freed and he flies away. King attacks him to reveal the invisible Sanji. Sanji passes Momo to Shinobu and praises his courage.

King turns into Pteranodon and attacks Sanji. Even with a raid suit, Sanji fears taking a lot of damage. They crash into a building. Luffy entrusts Momo to Yamato and goes away but he has to face Big Mom. The Yonko is mad that Luffy interrupts all her parties.

Big Mom attacks Luffy with Ikkoku Sovereignty. Luffy wanted to go to the roof but he has to dodge the attack. Big Mom’s thrust bursts through the Onigashima skull dome. The samurai are shocked by Big Mom’s power and wonders if they can defeat such strong opponents.

Big Mom summons Zeus, who has been stolen by Nami again. Zeus is forced to chose Mama once more, since he has Mama’s soul. Zeus is about to attack and kill a terrified Nami. That’s when Brook and Franky intercepts. Brook cuts Zeus in half once more. Franky rams his bike into Big Mom’s face, knocking her down to the ground.

Chapter 989 of One Piece manga can be the battlefield for Jack and Sulong Minks grudge match. Jack tortured the Minks, crippled their leaders, destroyed their home. The Minks withstood it all and still didn’t give up Raizo’s location. Their fight should be an absolute bloodbath.

It’s a 100 chapter gap – Carrot went Sulong in Chapter 888; the other minks transformed in Chapter 988. Carrot was a decent match against Big Mom Pirates and dealt good damage. The Mink troops, especially the Guardians and Musketeers should be a very capable match against Jack. The other Minks can handle the Gifters and Pleasures.

One Piece Chapter 989 might be the chapter where we finally get to see the real power of the Numbers, starting with Nagi. Nagi is very big in size and wields a mace just like Kaido. He can prove a capable opponent to multiple minks and we believe he can defeat a bunch of them.

We believe it will be a while before we get to see Kaido vs Akazaya. Neko and Inu still haven’t transformed – Oda is building up the hype. The Dukes are the strongest of the Minks and their Sulong form should put them at the peak of the Akazaya.

How strong are the Akazaya? Denjiro, Douji, Neko and Inu should be the strongest 4. Denjiro held out against a serious Zoro. Douji damaged Jack. Neko and Inu fought well against Jack and can go Sulong. Next, there is Kinemon, Izo, Kiku, Kawamatsu. They’re fairly strong and have strong convictions. Raizo is probably the weakest of the bunch – he even failed to cut Kaido.

We will get to see Sanji’s fate in One Piece 989. King is incredibly strong. He can kick off ships easily, he threw away Shinobu with no trouble whatsoever and Sanji saw a lot of trouble. Yes, King matched Sanji in kick power even without knowing he was there. No to mention, Sanji truly feared getting impaled by King. They can settle this clash in the next chapter.

However, we believe it is still too soon for an all endgame battle. For now, their fight should be interrupted, hopefully by Marco. We must see the aerial battle between Marco and King. Meanwhile Queen will act too. He was just insulted by King. Maybe he will release some sort of deadly gas in the midst of the battlefield; that should allow Chopper to act by giving everyone a cure.

Brook sliced Zeus once more. Nami did say that she is done with Zeus but fans are hoping that’s not the case. Zeus was a welcome addition to Nami’s arsenal. And then there is Franky. He floored Big Mom with his bike. The attack must have enraged her and when she gets up, she will definitely be bloodthirsty.

One Piece Manga 989 will show Momo getting saved and Yamato will probably take him in. Although Ulti continues to be a concern, Yamato will probably find time for Momo. Momo being saved will serve to be a huge boost in the Samurai morale. We expect Robin to step in, if she’s not preoccupied with the poneglyph search.

Lastly, we have Big Mom and Luffy. Assuming Mama wakes and wants to continue the fight, Luffy will have to take her on. And it will probably be Jinbe who steps in and helps Luffy. We have elaborated this below.

Every week the Japanese raw scans get leaked and then several scanlation groups start working on it to translate it to English and other languages. Once the raw scans have been translated to English, the spoilers get released.

The raw scans for One Piece 989 will most probably get released next Tuesday since this week there is a break. So we can expect the raw scans to release on 2nd or even 3rd September 2020. If you know Japanese then you can directly read the raw scans, otherwise wait for the English chapter to get released.

Also, not forgetting about the OP anime, One Piece Episode 938 will be airing this Sunday so check it out if you are an anime fan.

Luffy and Jinbe vs Big Mom

First of all, it is highly unlikely that Luffy can’t alone in this case. Big Mom will probably be his stepping stone to reach Kaido. He has to fully flesh out his power and fighting Big Mom can do that. Raileigh taught Luffy that his haki will bloom in dangerous situation. So fighting Big Mom will prove to be a great chance to polish his Advanced Armament Haki.

Meanwhile Jinbe is a great support. He already showed us that he is not afraid of Mama and can stand his ground before her. He even threw her off the Sunny. He can provide valuable assistance to Luffy.

On top of that, this fight has great emotional appeal too. Big Mom has been mad at Luffy and Jinbe for a while. Luffy isn’t particularly fond of her either; plus of he leaves her alone, she will wreck the nearby Strawhats. As for Jinbe, we have a suspicion that the Sun Pirates have been massacred by Mama when they covered for Luffy. So Jinbe will be motivated.

A lot is going to happen and stay tuned to get updated as soon as the spoilers and raw scans drop. Follow us on Facebook and Twitter to get all the latest updates and we have recently published articles on The King’s Avatar season 2 and No Game No Life Season 2 so maybe check them out also.

How To Reinstall Microsoft Edge In Windows 10