Spy x Family Episode 6 will show the next step of mission Strix, as there is still so much more to do. The release date countdown and time are finally out!

In a lighthearted episode, Anya is rewarded for her efforts. She passed the selection. For a kid like her, getting into Eden is a big deal. Twilight’s mission continues!

The anime is super successful. A part of any anime’s job is to promote the manga. Anime does boost sales, which is evident from Kimetsu no Yaiba, Jujutsu Kaisen, and Tokyo Revengers.

Similarly, Sky x Family has had a high sales boost. It is the highest-selling manga for the month of April.

In the current episode, Anya recreates her favorite show. She becomes a captured princess and Loid, who poses as Loidman, has to rescue the princess. They rent out a castle and enact the whole show, making Anya very happy.

A particularly interesting part was Yor. She got drunk and those few seconds of her viciously attacking Loid were highly entertaining. Fortunately, though, her heel broke and she fell flat. That was hilarious to watch after such a cool fight.

Spy x Family Episode 6 will focus on Anya joining Eden. But there is more to it. Up ahead, Anya will be bonding with Yor and we will love to see the mother-daughter combo shine brighter.

Seems like there is a bit of action ahead. We are excited to see their trip together.

We constantly recommend all fans watch anime legally. Supporting the industry is of utmost importance. This is why we are giving you the legal sources for watching Spy x Family Ep 6:

These 3 are legal and they are much better than any pirate website. Kindly consider watching from these instead. Help anime survive.

In the current episode, we saw that Anya has been accepted. Initially, she was not on the selected list, which scared us for a second. But of course, she was at the top of the waiting list. And then, she got selected!

So obviously, the next episode is going to focus on her getting in. We are excited to see the antics and jokes that are involved with it. We are sure that Anya has to face a lot ahead and Loid will have to jump through hoops to help her with it.

This week, we are getting Spy x Family Episode 6. It is coming out on May 14, 2022. This episode will show Anya going to Eden for the first time. There is still so much left to Loid’s mission. We are very excited about it.

Anyways, the episode comes out at 11 PM JST in Japan. But then again, the timing varies everywhere. So here, we are providing the timings and countdown for various parts of the world:

Now all you have to do is match any of these with your own timeline, and you are set.

The preview of the new episode tells us nothing. We see an angry Yor, a pretty woman, some trouble with Anya, kids of Eden Academy and a surprisingly funny face from Anya. Not much to go on, is it?

That is why we are bringing you the spoilers from the manga. They are really minor and will only make you excited for what is coming, without telling anything major. Let us explore these.

The trailer and first look of the Spy x Family Ep 6 have finally been released. We will share them here soon, in the meanwhile we recommend reading our article on Kingdom Chapter 720. 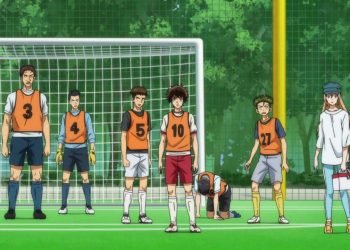 Return Of The Mount Hua Sect Chapter 66 Raw Release Date: The Next Era