by Rishavv
in Anime News
0 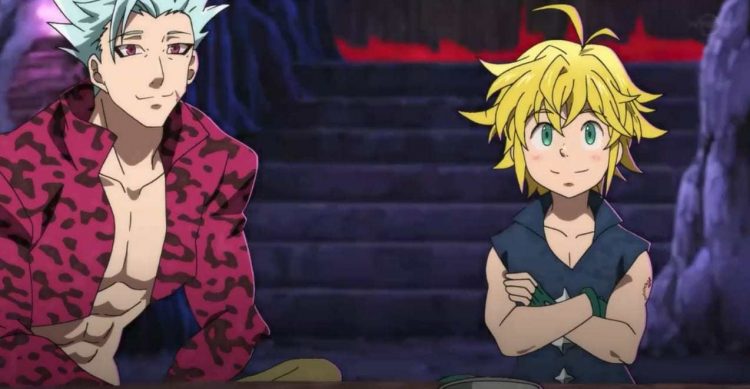 Episode 2 released today and now fans are very excited to watch what unfolds next in the upcoming The Seven Deadly Sins Season 4 Episode 3.

Important to note is that there is confusion about the season number of the new Seven Deadly Sins season, titled Dragon’s Judgement (Nanatsu no Taizai: Fundo no Shinpan).

Netflix has included the Signs of Holy War arc as Season 2 and hence the confusion. But we can confirm that the new Seven Deadly Sins: Dragon’s Judgement is the 4th season and most probably, the final one.

Nanatsu no Taizai Season 4 has entered the New Holy War Arc and we are already seeing nerve-wracking fights between the Assault Force and the Demon Clan.

Ludociel being overwhelmed by Zeldris asks Escanor for help and they eventually team up to fight against the Prince of Darkness, Zeldris.

Escanor displays his massive strength and Ominous Nebula has no effect on the Lion’s sin of Pride. He is able to dispel it and almost kills Zeldris with his new technique, Divine Spear Escanor. Zeldris is saved by Chandler who covers the area with darkness, making Escanor go back to his night form.

The end Season 4 Episode 2 leaves us in a cliffhanger with Ludociel now charging towards Zeldris, only the upcoming seven deadly sins s2e3 will tell us what happens next.

Keep on reading to know about the English Sub Preview, predictions, and Seven Deadly Sins Season 4 Episode 3 date of release. Also, My Hero Academia 298 will be out soon for everyone to read.

The next episode of The Seven Deadly Sins Season 4 Ep 3 is titled “Wholehearted Feelings”. Nanatsu no Taizai: Fundo no Shinpan Episode 3 will air officially on Wednesday, January 27th, 2021 at 5:55 AM JST in Japan.

The Seven Deadly Sins Season 4 will be a full-length season based on how the manga came to an end. But the anime would still need to cover around 80 more chapters of manga.

The anime is available for streaming on Netflix and will be available this year.  Some countries can also watch it using Amazon Prime.

That Time I Got Reincarnated As A Slime Season 2 Episode 3 and Black Clover Episode 161 will also air this week, so don’t forget to watch them when out.

The next episode of The Seven Deadly Sins Season 4 Ep 3 titled “Wholehearted Feelings” definitely makes us wonder what the next episode will be about.

The Seven Deadly Sins Season 4 Episode 1 showed us Ban finding the soul of Meliodas in Purgatory. Judging by the title, the upcoming episode might show the feelings of Meliodas and how Ban will manage to rescue him from Purgatory.

Season 4 Episode 2 gave us the incredible face off between Escanor and Zeldris. But will Zeldris be really defeated so easily?

Also, we haven’t seen Chandler and Cusack get into action. Will the next episode of Nanatsu no Taizai Season 4 Ep3 showcase their abilities?

Regardless, it’s hard to wait for the upcoming The Seven Deadly Sins Episode 3, especially after such an action packed episode.

Here’s the preview of Nanatsu no Taizai Season 4 episode 3 with English subs: (Not Out yet)

Let us know what you think about the upcoming Seven Deadly Sins episode in the comments down below and don’t forget to read our articles on One Piece Episode 959 and One Piece 1002.

My Hero Academia Season 5 Ep 4 Release Date, Where To Watch?