Naman Mathur also known as by his ingame alias Soul Mortal is one of the most popular personalities of India. Soul Mortal rose to fame after one of his tips and tricks videos went viral and Mortal instantly knew he needs to share his gameplay with the whole world and thus started posting Pubg Mobile videos on Youtube.

Mortal’s journey to stardom has been easy according to some people but very few people know how much effort he puts in everything he does and today with you all I will be sharing Mortal’s Biography, his achievements and his sensitivity as well so stay tuned.

Soul Mortal is from Mumbai and he is 23 years old as of now and has already achieved great things in his life and moving forward he has many great plans for the future as well. Mortal is the most humble guy that anyone has ever met and he is always friendly towards others and his gameplay is always breathtaking and we can say for sure that he is one of the best Pubg Mobile players in the world.

Mortal is an ex Mini Militia pro player but when his teammates started quitting the game to go to either critical ops or Pubg Mobile Mortal thought he should switch too and started playing Pubg mobile. Mortal started playing PUBGM on June 2018 and he was good at the game from start and in season 2 of the game, he easily reached the tier of  ACE.

Mortal started playing in season 2 and reaching ACE was no problem for him at all and even it was his first time playing the game he still reached ACE tier with a K.D of 5.17. Mortal took it one step further in Season 3 and started to push for Conqueror and then the most amazing thing happened, he reached Rank 3 in all over Asia in TPP Squads and the two above him were both hackers so we can say that in season 3 Mortal was No. 1 in TPP Squads Asia.

What’s A Day Like In the Life Of Soul Mortal?

What Are Soul Mortal Educational Qualifications?

Mortal is a B.Com Graduate and now he is a full-time streamer and a PUBG Mobile competitive player.

What Device Does Soul Mortal Use?

Mortal initially started playing on iPad 2017 but then later switched to a mobile device for playing competitive games. Mortal bought ASUS ROG to practice and stream but he owns iPhone XR and OnePlus 7 Pro as well.

Who is Soul Mortal’s Favourite Player In The World?

No, Rav3n is not Mortal’s girlfriend. Mortal in an interview with PUBG Mobile Esports cleared that they are only friends and nothing more than that and people should stop making and spreading rumors.

What Is Soul Mortal Pubg ID?

Soul Mortal’s PUBG ID is 590211476 and you can go to “Add Friend” and input the player id and then you can add mortal as a friend on PUBGM but Mortal needs to accept the friend request in order for you two be friends. 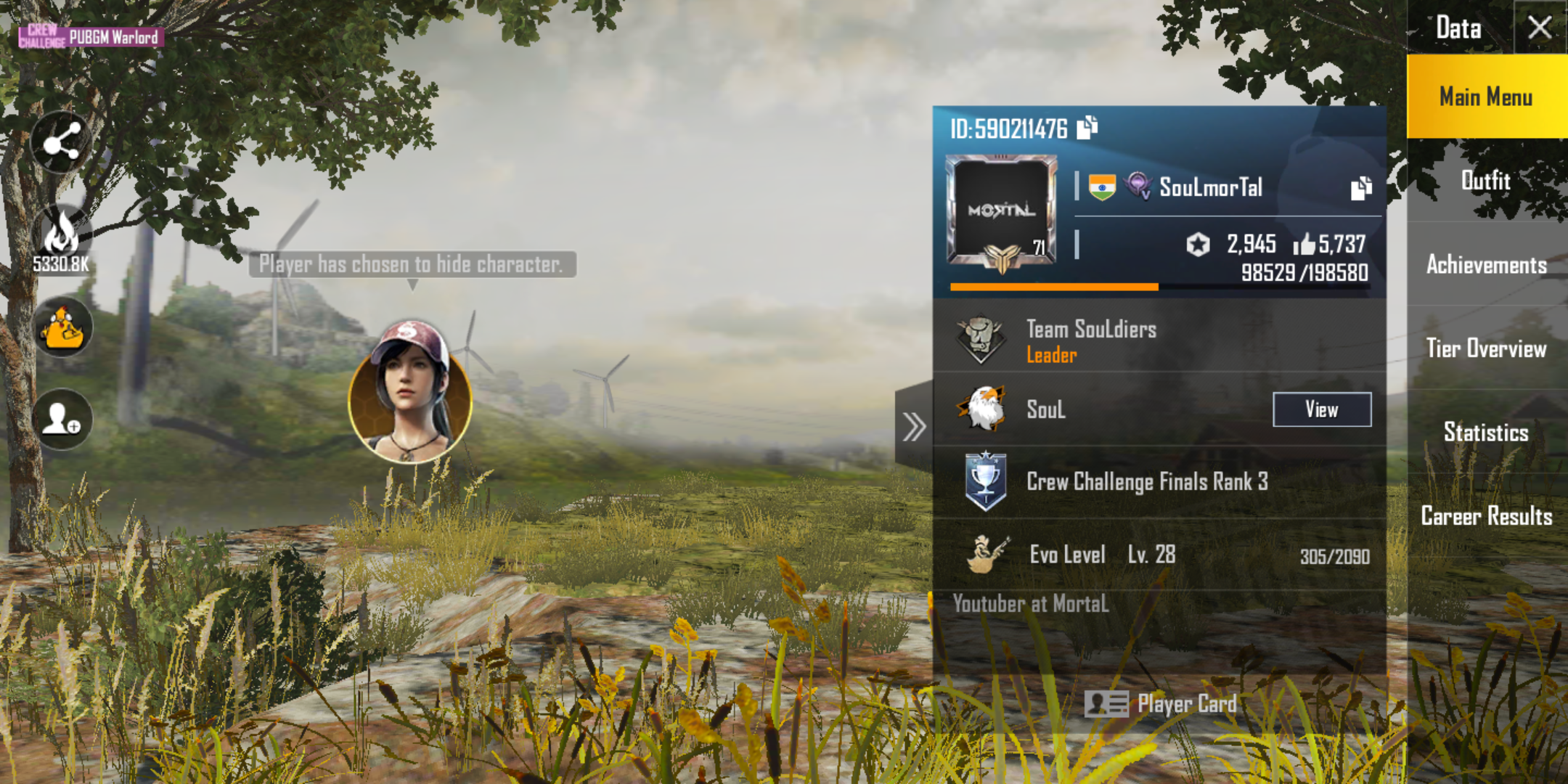 Why Did Mortal Leave Competitive Scene?

Mortal announced on his community tab that he is taking a temporary break from Competitive matches and he will be back soon and better than before.

Mortal Is The Leader Of Soul?

Soul Mortal is not the leader of soul, the original leader of Soul Esports is Soul Vicky.

How Many Subscribers Does Mortal Have?

Mortal has around 2.7 Million Subscribers and he will touch the milestone of 3 Million soon.

Who Are Mortal’s Crew Mates and Competitive Teammates

Mortal plays all his competitive and crew challenge matches with his all-time teammate’s Soul Ronak, Soul Viper and Soul Owais. These three support Mortal with everything they have got and they are even best friends in real life.

Soul Mortal is huge on Social Media, he has more than 2.6 Million Subscribers on Youtube and more than 700k on Instagram but only has around 12,000 likes on Facebook. We are including the screenshots for all his socials below so that you can find him easily on all the different social media sites.

Soul Mortal is one of the best Pubg Mobile players of India and he with his team has been dominating the competitive scene in India and this year they won PMCO Indian regional finals and went to Berlin for the grand finals where they competed against the 16 top teams of the world.

Mortal started playing in June 2018 and the first every tournament he registered for was PMSC but unfortunately, they didn’t qualify for PMSC because that time Mortal didn’t have any fixed team with which he used to practice but once he met Ronak, Viper, and Owais he got his dream team and they have not stopped since then.

Mortal won PMIS with his SOULdiers and then again won PMCO India regionals and went to Berlin where they showed some good game but unfortunately, they were not able to break into top 10 and secured the 12th position with total 33 kills and they even got a chicken dinner in the last game of Day 2.

Mortal did us proud by representing us on the International stage in Berlin and we all are really proud of him but he got some hate as well and after returning from PMCO he posted in his community post saying that he is taking break from Competitive games and will be doing full time streaming for some time but he didn’t say that he is leaving competitive stage and he will come back for sure and make us all proud,

Mortal is still young and has a lot to show us and we expect great things from him in near future so stay tuned to his Youtube and Instagram for the latest updates and we will be updating this article on a daily basis so make sure to visit regularly. Feel free to share your thoughts in the comment box below and we will be covering all the top PUBGM players one by one so stay tuned.