This looks bad. It seems like Vegeta is about to be defeated, again! We have seen this so many times that the outcome is practically screaming even before it is put on paper. Dragon Ball Super Chapter 76 will tell us whether Vegeta loses or if he pulls through this time.

Let us reminiscence for a little bit. A new villain comes. Goku fights and loses. Vegeta comes in and does well. Vegeta loses. Goku finally returns to defeat the villain. This pattern has gone on for such a long time.

It is like a tradition now. No matter how strong Vegeta gets, Goku still comes out on top.

We desperately hope that by some miracle, Vegeta doesn’t lose in Chapter 76. He has been like this far too long. It is time to stop torturing this proud man, just to make Goku look better.

The fandom already favors Vegeta more. Maybe he should finally get a win or a draw!

Fans are looking forward to reading DBS 76. It seems like the fight will come to an end and the strongest one in the Universe will be known.

But, as the competition between these three gets more and more intense, a new power is in the making and we would love another competitor!

Dragon Ball Super Season 2 is also set to be announced soon, finally some good news for the anime fans.

Shonen Jump is letting us know about the next chapter. The raw scans of Dragon Ball Super Manga 76 will be released somewhere around September 15, 2021.

The official Dragon Ball Super 76 English chapter will be released on September 20, 2021, the same day as Boruto Chapter 62.

You can find them on the Viz website, mangaplus website, and the shonen jump app. All of these sources offer it for free and they are absolutely legal.

The illegal fan translations are practically non-existent for this series. Probably because the official release is quite speedy and accurate!

Goku feels the gigantic amount of energy in his bones. He is clearly impressed by Vegeta and Granolah fighting.

He desperately wants his body to heal and uses the techniques he had learned to speed up his recovery. But why won’t he take a senzu bean? We might see in Dragon Ball Super Chapter 76 spoilers.

How is Vegeta winning against Granolah?

We saw that Vegeta unlocked his new form in the last chapter. He is putting it to proper use. Vegeta claims that just like how Goku’s body reacts on its own, his body possesses a super ego and it is one of his strengths.

Vegeta continues to tank a lot of damage and keeps fighting Granolah. He uses his experience to get the upper hand.

While Granolah is still strong, it seems like Vegeta was winning for a while. This is because Granolah’s barrage of attacks seemed to fail to Vegeta’s durability.

Vegeta boasts that Granolah had managed to pull out more power from him due to superior techniques.

No, that the power of the Hakaishin is his own, Vegeta pushes forward to defeat this opponent. Granolah had to resort to destroying the city to properly get back at Vegeta. In Dragon Ball Super 76 raw scans, we will see if Granolah manages to rile up our deuteragonist more!

How did Granolah turn the tables?

This will be the more important question in Dragon Ball Super manga 76. How exactly did Granolah get the ability in both eyes? Does it have something to do with Oatmeal?

All we know is that Granolah ditched his eyepatch and it was taken away by his ship somewhere. Does he have a secret ally?

In the upcoming chapter, Granolah will probably manage to dominate Vegeta. With both eyes functioning, he can probably pinpoint any and all weaknesses in his opponent.

He even managed to cancel out Vegeta’s massive Hakai energy. It seems like this is the end of the line. Vegeta is down and as Goku says, his fighting spirit has worn off!

What are Oil and his group doing?

After quite a while, we see the search for Dragon Balls. It keeps reminding us what this series was originally about. Remember the beginning? Goku had to work so hard to gather all 7 of them. And then came Z, where he could do it easily on earth.

Currently, we see the search for the Dragon Balls by Elec and Gas. The Heeters are enjoying this battle. They are glad that these 3 warriors are wearing each other down.

It seems like their plan is to gather power for themselves from the dragon.

After that, simply strike when the victor is still licking his wounds. Chapter 76 raw will show us whether their plan will be successful. And from the looks of it, Gas will be the one who gets endowed with a lot of power!

The spoilers for DBS 76 are finally here!

These are only the early spoilers and more will be shared soon. The storyboards are out and can be found online.

Next, you will find the complete spoilers for the chapter within September 20, 2021. We ask you to be patient and keep an eye on Recent Highlights. 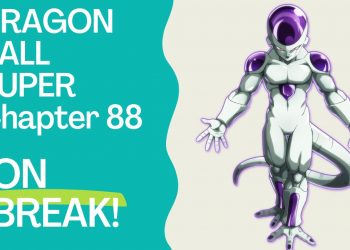 The S-Classes That I Raised Chapter 71 Release Date, Spoilers

Hinamatsuri Season 2: What Is The Release Date?